Cachopo is a lovely small village in the Tavira department, situated in the wonderful Algarve region, on the amazing Caldeirão Mountain, considered to be the most typical in the North-East of the Algarve.

This mountain side village, situated in a beautiful valley, has been occupied by man since ancient times, presenting several archaeological vestiges of great importance.

Cachopo maintains its rural tradition, producing here some of the typical Algarve’s products, such as honey, cork, wool and cheese.

It is worth knowing Cachopo and the small rural settlements on its environs, characterized by its popular architecture with one floor houses, schist walls painted in white, some of them with colourful bars around doors and windows, with the typical Algarve chimney on the roof.
Cachopo’s highlights are the Santo Estevão Mother Church dated from 1535; the “Casas Circulares” (Round houses) or “Palheiros” (barns), pre-historic stone houses that have been used by farmers; the rural Windmills; the interesting “Fonte Férrea” that once was the place of election of the Algarve’s rich people for its medicinal waters and is nowadays a leisure place, with a lovely snack park.

Quite interesting is the Cachopo Museum Nucleus, specialized in the ethnology of the region, aiming for the preservation of the traditions and workmanships of the Caldeirão Mountain that still has in Handicraft one of its main activities.

There are several pedestrian tours previously organized, providing amazing landscapes, allowing to get to know the “other” Algarve, near the Alentejo region, far and different from the touristic Algarve of the golden beaches and crystalline waters, yet filled with tradition, heritage and amazing panoramas waiting to be discovered.

NB-if you or any of your passengers are prone to car sickness driving to Cachopo could be a problem as the road is full of twists and turns and the drive is quite long. 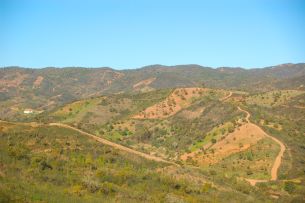 The Ria Formosa Natural Park was established in 1987 and encompasses 60 km of coast between Ancao and Manta Rota in the Eastern Algarve. The surface area of the park is around 18 hectares through the districts of Loule, Faro, Olhao, Tavira and Vila Real de Santo Antonio.  A major part of this area is associated with the barrier island system consisting of a coastal dune barrier, running parallel with the coast and defending a shallow, warm water lagoon with salt marshes, channels, tidal flats and islets. The Environmental Education Centre of Marim (EECM) is a 60 hectare area of the park situated at Quinta da Marim - Olhao, between Olhao and Tavira on the EN125 .  From Olhao take a right turn, sign posted "Ria Formosa", in front of a petrol station.  Follow the road round and enter the Centre via large poorly marked gates on the left hand side.  Entry costs €2.20/person and you will be given a map and some basic information and directed to the car parking area.It is open Monday to Friday from 0800-2000 and weekends and holidays from 1000-2000. 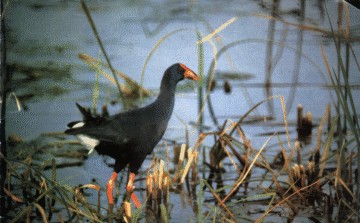 Within the Centre there is a nature trail, about 3 km long, taking about 1 hour to walk around, it is a flat walk so suitable for everyone.  It is marked with red striped wooden poles and includes stopping points equipped with information panels.  The trail features representative aspects of the ecosystems of Ria Formosa: salt marshes, Salinas, dunes, pine woodlands and traditional agriculture.  Among the buildings that have been restored there is a tidal mill and a traditional farmhouse, a villa built by locally renowned poet Joao Lucio at the beginning of the century and Roman ruins.  There is also a kennel specialising in the famous aquatic Portuguese Water Dog, a working dog used extensively in the fishing industry in years gone by. 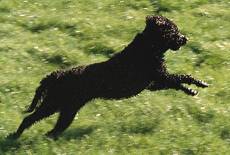 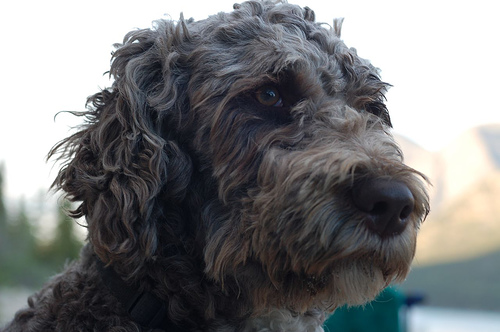 The visitor centre includes exhibition areas, aquariums, an auditorium, library and several other education facilities.  The Centre also has books and leaflets about nature conservation and Ria Formosa.  There is also a restored, ancient boat used for the transport of Tuna fish moored at the jetty - trips around the lagoon are available on this boat - ask at the Reception desk.  This is an interesting place and is well worth making the effort to drive to it - with the motorway close by, where-ever you are staying will not be very far way.

Ria Formosa is an important area for birds, especially waterfowl and it's significance arises for several reasons:

It is a wintering ground for birds from northern and central Europe, particularly for several duck species such as the Wigeon, the Shoveler, the Teal and the Pochard and waders such as the Dunlin, the bar-tailed Godwit, the Curlew and the Grey Plover.

It is a stop-over point for migrating birds between Europe and Africa.

It provides shelter for species that are rare in Portugal such as the Purple Gallinule which has it's only confirmed breeding ground in Portugal within the Natural Park - it is for this reason that it was chosen as the symbol for the Park. 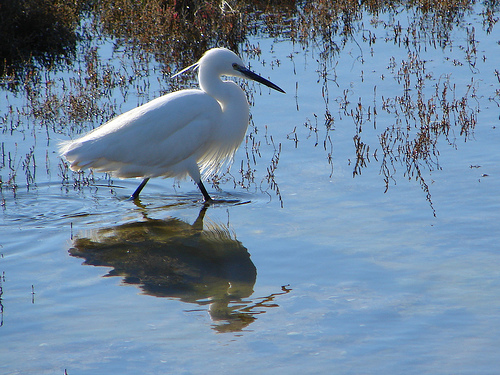 It provides shelter for many threatened species whose habitats are receding in Europe.

The importance of Ria Formosa is not limited to waterfowl: the dunes and salt marshes exhibit some unique vegetation with plants specially adapted to the harsh environment.  The lagoon acts a nursery which several fish species such as the Gilhead, the Common Bass, the White Bream and the Shrimp use for their early developmental stages.  Shellfish farming is extensive and provides around 80% of Portuguese  Clam exports.

In recognition of the national and international importance of this area, the Portuguese Government has classified this area as a Natural Park and has adopted several aims to help achieve a balance between the need to protect the natural values and the promotion of sustainable social and economic development. 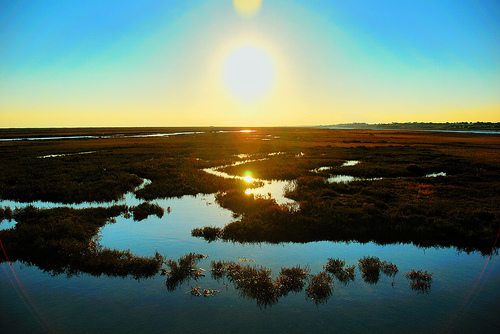 A lovely day out is to take a boat trip on the river Guadiana.Boats leave from Vila Real and there are many operators to choose from-below are details of two trips available.

Enjoy a wonderful boat trip on the river Guadiana relax and enjoy the wonderful landscape along the way. Our final destiantion is Alcoutim. Visit this charming village, do some shopping, or have a look at the museum within the old castle. The owners of the boat are personally looking after you throughout the day.
Personal and individual service are the hallmark of all the excursions. There is no language barrier since English,Portuguese and German is spoken by the owners.

Depending on the weather and the season there is also the opportunity to have a swim and to enjoy some of the most beautiful beaches of the area. With that in mind do not forget your bathing suits and towels. 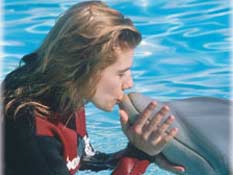 Zoomarine is one of the Algarve´s biggest attractions and certainly lives up to the hype. Open all year round, entry tickets are worth every cent and can be booked online for a discounted price. You can spend a fun packed day at the park with plenty to keep all the family entertained. 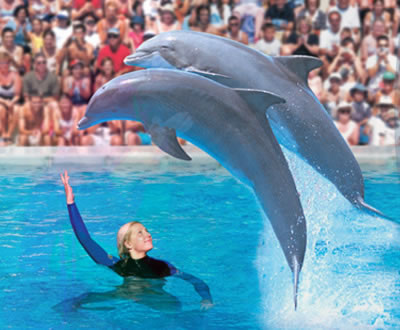 The spectacular shows include: Dolphins in Motion - a breath-taking demonstration of the dolphins’ agility, intelligence and the special bond they have with their trainers. I could have watched this show several times over, especially as the routine varies from show to show to keep the dolphins stimulated.

The Magic Book - a pantomime performed by seals, sea lions and their trainers, loosely based on Peter Pan.This show gets lots of laughs and applause from the audience and is definitely one that the kids will enjoy. 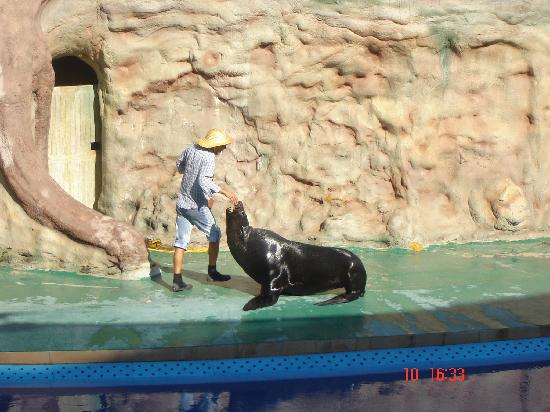 The Enchanted Forest - a slap stick show with tropical birds that promotes environmental awareness. Sweeping the Skies - a dramatic and educational birds of prey display, which allows you to see these impressive birds very close up! 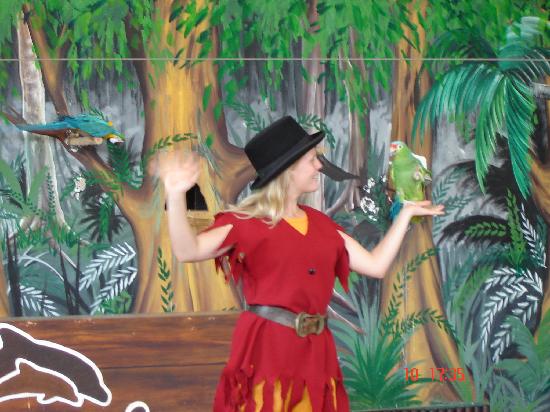 There is also an Aquarium, showing over 20 marine ecosystems, and several marine life habitat exhibitions scattered around the park. Our favourite at the moment, is the 4D cinema show. Aimed at raising our environmental awareness, this show is an entertaining assault on our senses. Poloar bears sliding down glaciers, monkeys throwing apples at you, sharks with their teeth bared swimming towards you - fantastic!

What impresses most about Zoomarine, is that all the animal shows and exhibitions are educational and promote awareness of environmental and conservation issues. There is also a newly built Rehabilitation Centre. Marine species that have washed up along the Algarve coastline in distress are treated here before, hopefully, being released back into their natural environment.

If all that isn´t enough, there are family fairground rides, including the big wheel, which gives a spectacular view of the whole park, a mini rollercoaster and a fabulous double decker carousel all included in the entry price. Bring your togs as there is an area with swimming pools and waterslides where you can cool off and have a picnic. The park has good access for wheelchairs and buggies, so is definitely enjoyable and accessible for everyone. 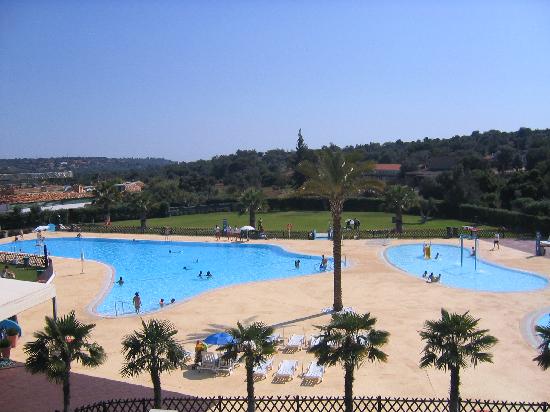 For a once in a lifetime experience, there is also the opportunity to swim with the dolphins in the dolphin interaction area. This is located in a tranquil environment, hidden away from the main park and the programme includes an educational talk and the chance to take part in some of the basic training techniques in the water with the dolphins. This is a truly magical experience - although expensive, the contact with the dolphins and the memories you take away are priceless.

Directions from Tavira-take the A22 in the direction of Faro.Continue until you come to exit 9 signposted Guia-follow the sign to Guia you will pass Algarve Shopping a big shopping Centre on your left-continue on this road until you see Zoo Marine on the left.